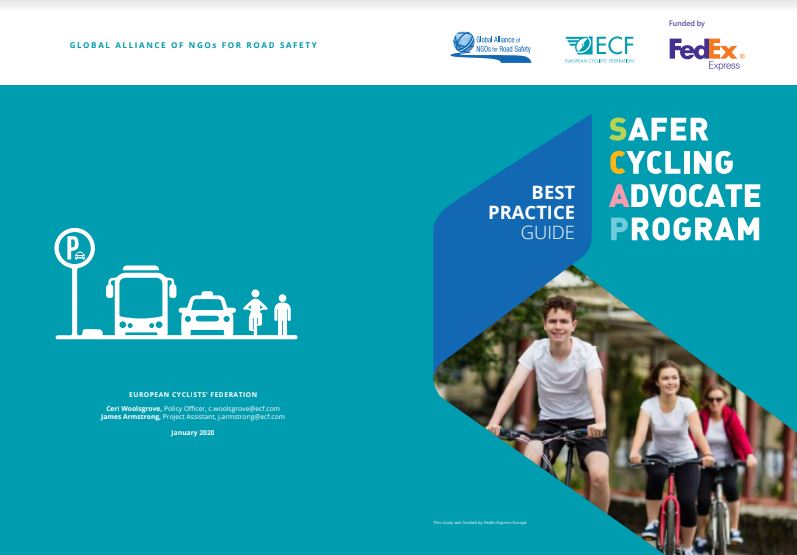 FedEx Express, a subsidiary of FedEx Corp., the Global Alliance of NGOs for Road Safety, and the European Cyclists’ Federation (ECF) are today publishing a best practice guide, aimed at supporting community and non-government organisations (NGOs) advocating for safer cycling in European cities.

Authored by the ECF, together with the Dutch Cyclists’ Union (Fietsersbond) and the Danish Cyclists’ Federation (Cyklistforbundet), the guide gives a comprehensive overview of the behaviours, infrastructure, education, legal framework and enforcement in place in the Netherlands and Denmark – two countries that have successfully developed strong cycling cultures.

The guide aims to be a valuable source of information for organisations eager to create road conditions that will lead to greater numbers of cyclists, and improved safety for all road users.

Rock Sherman, Vice President Road Network Europe, FedEx Express said “One of the most striking links found between cycling and safety, is the potential for safer cycling measures to positively and directly influence the safety of our roads for all users. This document will guide any organisation looking to use the examples of Amsterdam and Copenhagen to promote safe cycling and improve road safety for everyone.”

Ceri Woolsgrove, Policy Officer, ECF said “The Netherlands and Denmark have each spent decades developing policies and infrastructure focused on keeping cyclists safe. Represented in the project by ECF’s members, Fietsersbond and Cyklistforbundet, this guide collates the expertise of both countries in an accessible format for the first time. Policy makers must now have the confidence to implement the measures described, in order to move toward a safer and more sustainable transport system.”

Lotte Brondum, Executive Director, Global Alliance of NGOs for Road Safety, said “How safe people feel is an important factor in the mode of transport that they choose. This guide will be useful for the people on the ground — the road safety NGOs in their work for safer streets. They know the realities of their cities’ streets and they are well-placed to help governments put citizens at the heart of mobility interventions. This guide will give them the evidence base and guidance they need to advocate for measures that will help save lives.”

The launch of the guide marks a major milestone in the Safer Cycling Advocacy Program — a two-year program funded by FedEx Express Europe under charitable giving platform FedEx Cares. The second year of the project will see the roll-out of workshops delivered by the ECF to NGOs in Bosnia, Croatia and Slovenia. The project will serve to benefit cyclists in those countries, which according to the 2014 Eurobarometer Report, number approximately 575,000 people citing bicycles at their primary mode of transportation. Additionally, a ‘Back to School’ awareness and educational campaign, planned for September 2020, will support the education of young people in these countries.